HOW DOES RANKED CHOICE VOTING WORK?

When Ranked Choice Voting, voters rank as many candidates as they want in order of preference. If any candidate has a majority of the first preference votes, then that candidate is elected. If no candidate receives more than 50% of the vote, the RCV process builds a majority by eliminating the least-supported candidates and transferring ballots cast for the those eliminated to the voters’ next preference.

For voters, Ranked Choice Voting is literally as easy as 1, 2, 3. Just rank your choices in order of preference.  In this example, our voter preferred Candidate C, but ranked Candidate A as their second choice and Candidate B third. 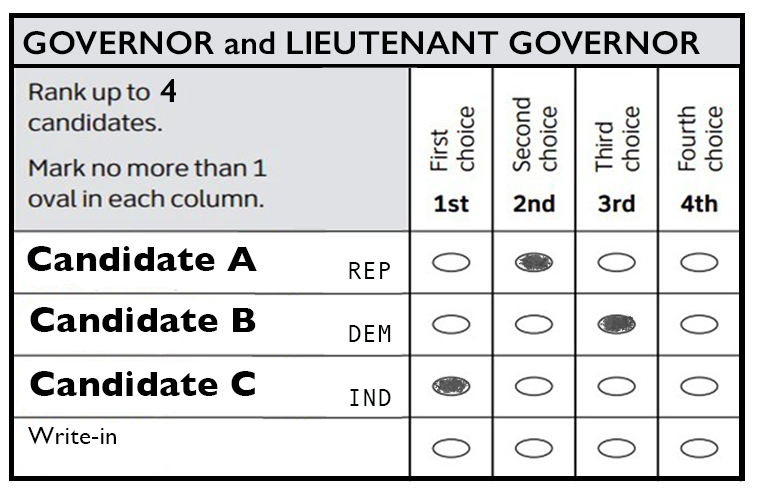 RCV ballots are counted in a series of rounds.

Just like we are used to, all the first choices are counted. If a candidate has a majority of votes, (more than 50%) that candidate wins.

Candidates continue to be eliminated after each count until one candidate has won the majority.

In the example ballot above, no candidate received a majority of votes.  This voter's first choice would be eliminated and their vote added to Candidate A's tally.

Ranked Choice Voting can also be used to elect multiple candidates at a time, such as elections for many City Council seats. For more details, check out this multi-winner RCV example provided by our friends at FairVote.